The Interim Sexual Harassment, Misconduct, & Discrimination Policy (formerly known as the Title IX Policy) prohibits sexual assault, dating and domestic violence, sexual harassment, stalking and other gender based discrimination, misconduct, and harassment. Individuals who have been subjected to sexual harassment or misconduct are strongly urged to promptly report such incidents. The College will respond promptly to all reports of Prohibited Conduct. The College will oversee and implement fair, equitable, and impartial resolution processes that may be used to hold the Respondent accountable. Accountability may take various forms, but should a Formal Grievance Process be used, and the Respondent is found in-violation of College policy, the College will issue sanctions to the Respondent and offer remedies to the Reporter as appropriate. The severity of the corrective action, up to and including termination or expulsion of the party found responsible, will depend on the circumstances of the particular case.

The Student Conduct Code aims to protect the community and the rights of its members, to cultivate and sustain a positive living and learning environment, to educate Students regarding responsibility and accountability for their actions, to encourage and foster self- insight and self-initiated change of behavior, to uphold the procedural rights of Students accused of violating the College’s rules and regulations, and to encourage the application of ethical decision-making in the daily life of Students.

Both of these policies can be accessed here:

The College’s highest priority is the physical and mental health, safety, and well-being of individual students and the campus community. An element of promoting safety is providing clear, responsible methods of reporting and addressing incidents of sexual misconduct. Therefore, in order to remove potential barriers to reporting sexual misconduct, the Office of Title IX & Sexual Misconduct nor the Office of Student Conduct & Off-Campus Services will charge a student with violating any expectations of student conduct regarding alcohol or other drugs if that student reports such conduct within a complaint of possible sexual harassment/misconduct. However, adjudication for behavior may be considered in the event that the use/administration of alcohol and/or drugs were used to facilitate the alleged sexual misconduct.

“Effective Consent” is informed, freely and actively given mutually understandable words or actions which indicate a willingness to participate in mutually agreed upon sexual activity. A person may be unable to give Effective Consent when they are unable to consent due to their age, or because the person is physically helpless, mentally incapacitated, or Incapacitated from alcohol or other drugs.

When Effective Consent is withdrawn or can no longer be given, sexual activity with any party does not necessarily constitute consent to any other sexual act under the influence of drugs and/or alcohol force, or threat of harm must stop immediately.

“Incapacitated” is being in a state where a person lacks the capacity to understand the fact that the situation is sexual, or cannot understand or make a rational and reasonable judgment about the nature and/or extent of a situation (the “who, what, when, where, why and how” of the sexual interaction). A person who knows or should reasonably know that another person is incapacitated may not engage in sexual activity with that person.

Persons who meet any of the following criteria or conditions are incapacitated:

II. Passed out or otherwise unconscious

III. Under the age of consent or under a certain age in relation to the other party to the sexual activity (both of which are matters of state law)

IV. Due to a disability, or whom do not have the mental capacity to consent.

A person who does not meet any of those criteria or conditions for incapacity may become incapacitated through the use of alcohol or drugs. Such a person’s state of incapacity is a subjective determination that is based on all of the facts available because persons reach incapacitation at different points and as a result of different stimuli.

Alcohol related incapacity results from a level of alcohol ingestion that is more severe than that required to produce the minimum levels of influence, impairment, intoxication, inebriation, or drunkenness. Factors that can influence a person’s status include gender, body size and composition; tolerance for alcohol and other drugs; amount and type of alcohol or other drugs taken or administered, and the mixture taken; amount of food intake prior to administration; propensity for blacking out; genetics; and time elapsed since the ingestion of the alcohol or drugs.

The effects of alcohol and Drug use often occur along a continuum. For example, alcohol intoxication can result in a broad range of effects, from relaxation and lowered inhibition to euphoria and memory impairment, and to disorientation and incapacitation. Incapacitation due to alcohol or drug use is a state beyond “mere” intoxication or even being drunk. It exists when a person lacks the ability to make or act on a considered decision to engage in sexual activity. Indicators of incapacitation may include inability to communicate, lack of control over physical movements, and/or lack of awareness of circumstances. An incapacitated person can also experience a blackout state during which the person is conscious, but has limited ability to form or retain memories, and may exhibit verbal or non-verbal (e.g., a nod) expressions that under normal circumstances between two individuals acting with full capacity might reasonably be interpreted as conveying consent. Because that person does not have the capacity to consent, despite those expressions, consent is lacking. It is especially important, therefore, that anyone engaging in sexual activity be aware of the other person’s level of intoxication due to alcohol and/or Drug use. The relevant standard that will be applied is whether the Respondent knew, or a sober reasonable person in the same position should have known, that the other party was Incapacitated and therefore could not consent to the sexual activity.

Some medical conditions may also cause incapacitation. Incapacity can result from factors including, but not limited to mental disability, involuntary physical restraint, or the administration of substances.

Forms of Prohibited Conduct that would fall under Sexual Assault include:

Sexual Harassment is a collective term that includes distinct, and sometimes overlapping definitions. The Title IX Final Rule defines Sexual Harassment as conduct on the basis of sex that satisfies one or more of the following:

In addition, consistent with Title VII of the Civil Rights Act of 1964, the New Jersey Law Against Discrimination, and the recognition that Sexual Harassment may occur in a wider variety of contexts, the College also defines Sexual Harassment to include:

Engaging in a course of conduct directed at a specific person under circumstances that would cause a Reasonable Person to fear for their own safety or the safety of others or suffer substantial emotional distress.

“Course of Conduct” means two or more acts of repeatedly maintaining a visual or physical proximity to a person; following, monitoring, observing, surveilling, threatening, or communicating to or about a person directly or through Third Parties, by any action, method, device, or means; interfering with a person’s property; repeatedly committing harassment against a person; or repeatedly conveying, or causing to be conveyed, verbal or written threats or threats conveyed by any other means of Communication or threats implied by conduct or a combination thereof directed at or toward a person

College Policy protects all students and employees from all forms of retaliation.

Retaliation is considered any adverse action, intimidation, threat, coercion or discrimination against an individual (including Students, employees, and Third Parties) for the purpose of interfering with any right or privilege secured by Title IX or its Final Rule, or because the individual has made a report or Formal Complaint of Prohibited Conduct, been accused of Prohibited Conduct, testified, assisted, or participated or refused to participate in any manner in any investigation, proceeding, hearing, or other resolution process under this Policy.

For information regarding examples of retaliation in the workplace please refer to The Policy Prohibiting Discrimination in the Workplace/Educational Environment.

Abusive or harassing conduct directed at a person or group because of actual or perceived membership in a Protected Category (sometimes generally known as “bias” or “hate crimes”) may result in an enhanced sanction. 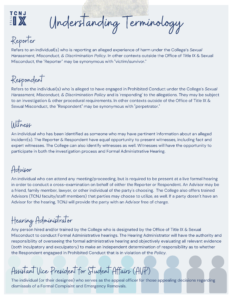 For any questions or concerns, please contact the Title IX Coordinator, Chelsea Jacoby, directly at jacobyc@tcnj.edu or (609) 771-3112.