During any College resolution process there will be thorough communication with both students regarding each step in the procedure from the Title IX Coordinator and/or Investigator(s). Neither student is mandated to participate in any Prohibited Conduct proceeding(s), however their absence may limit the ability of the staff within the Office of Title IX & Sexual Misconduct to evaluate all relevant information to the fullest extent possible. Both students may be assisted by an Advisor of their choice through all phases of the College process and can be provided with accommodations regarding concerns for their personal safety, well-being, and/or fears of confrontation during the process.

Alternative resolution is a voluntary process within The College of New Jersey’s Sexual Harassment, Misconduct, & Discrimination Policy that is grounded in Restorative Justice and allows a Respondent in a Prohibited Conduct case to accept responsibility for their behavior and/or potential Harm. By fully participating in this process the Respondent will not be charged with a violation of College Policy. The alternative resolution process is designed to eliminate the Prohibited Conduct, prevent its recurrence, and remedy its effects in a manner that meets the needs of the Reporter, and attempts to repair harm caused, while still maintaining the safety of the overall campus community.

The alternative resolution process will only be used at the request and agreement of both the Reporter and Respondent and under the direction of the Office of Title IX & Sexual Misconduct. In order for the Alternative Resolution Process to be appropriate both parties must have an understanding and agree on the necessary elements of the process. Both the Reporter and Respondent will have to agree to the following terms should they wish to participate in the Alternative Resolution Process:

The College reserves the right to suspend or terminate this resolution option at any time, prior to both parties formally agreeing to the terms in the contract, and revert back to investigation.

Contents of the Resolution Agreement

Restorative Processes is a philosophical approach that embraces the reparation of Harm, healing of trauma, reconciliation of interpersonal conflict, and reintegration of people who have been marginalized through participatory learning and improved decision making skills. Rather than focusing on what policies have been violated, Restorative Processes instead identify who has been harmed and what actions are necessary to repair the harm.

The College recognizes that there is no single way to try and repair harm, and as such, the resolution agreement drafted as part of this process is tailored to be as individual as possible to try and repair in individualized harm that may have been caused/experienced. Therefore, there is no standard contract that is used for each case, rather they are unique to the needs of each individual Reporter.

While the resolution agreement is personalized and specific to each individual Reporter, some examples of possible options that Students may utilize in this process include, but are not limited to:

In contrast to the Formal Grievance Process, the Alternative Resolution Process does not involve the implementation of punitive sanctions for the Respondent. This is a non-punitive process, which rather than focusing on whether a Policy violation occurred, focuses on identifying the incident that caused the harm and to whom, the needs of the person who was harmed, and how the person who caused harm can repair it. Should a Respondent agree to participate in this process and completes the agreement in good faith, no sanctions will be applied, nor will their participation be reflected on their disciplinary history through the College. However, in the event that the Respondent signs the contract stating that they will participate in all educational items laid out in the agreement and fails to do so, the Respondent may be charged with Failure to Comply with a Directive of a College Official under the Sexual Harassment, Misconduct, & Discrimination Policy and may receive punitive sanctions as a result.

Exceptions for Use of Resolution Option

Decisions as to whether this resolution process is appropriate to use are made on a case by case basis, as no two cases are identical.

Common FAQs regarding this resolution option:

Is participation in this resolution process mandatory?

No. The College will not mandate either party to participate in any type of resolution process. In order for the Alternative Resolution Process to be used, both students must voluntarily agree to participate, otherwise this resolution option cannot be pursued.

Will the Respondent’s participation in this process appear on a disciplinary background check ?

No. This process is grounded in restorative justice and is focused on repairing the potential harm caused through educational means as opposed to punitive measures. If the Respondent agrees to participate in this process and completes the agreement in its entirety, nothing will be reflected on a background check. However, if the Respondent agrees to participate/signs the agreement, but fails to complete the contract as agreed upon, the case will be investigated and the Respondent may be charged with Failure to Comply with a College Directive and could face punitive sanctions, which would end up on a disciplinary history. 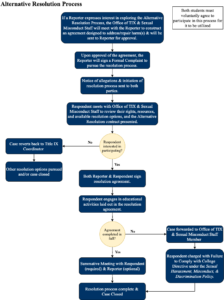 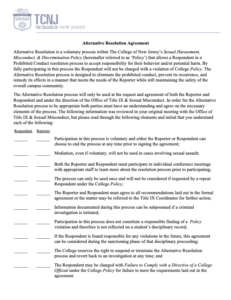 If you would like to submit information regarding an incident that occurred on behalf of yourself, a friend, a colleague, or another, you are encouraged to File A Report Here and the Office of Title IX & Sexual Misconduct will respond accordingly.

For any questions or concerns, please contact the Title IX Coordinator, Chelsea Jacoby, directly at jacobyc@tcnj.edu or (609) 771-3112.